In Brazil Father’s Day is celebrated on the 2nd Sunday of August. We do not pay attention to the commercial side of it, but take it as another good occasion to reunite the family and celebrate being together. Pierre, Jacques and his one-year-old daughter, Melina, Christophe and Camila came for lunch at mother’s on Saturday so we raised a glass to all fathers: the present ones, the past ones and the ones to be.

Last year on this same date we were also together, but mourning Dad’s loss.  He died on August 9th, 6 days after my birthday, which we still celebrated together. I had just come back from a month in Spain and gone down to the coast to visit my parents before starting classes at school. My son, Jacques also came for the occasion and introduced him to Melina, his daughter, who was then only 3 months old.

Alzheimer disease had already ravaged his brain, robbing him of his speech and making him withdraw to his own world as his mental and physical acuity deteriorated. Yet, weak and apathetic as he may have seemed, he responded affectionately: He clapped his hands in delight and cried when we showed him his first great-granddaughter.

Later, before leaving, Jacques put her in his arms and took two photos, which happen to be the last  ones we have of him alive. 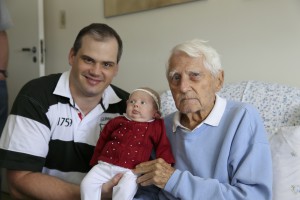 The photos do not do justice to the resolute, athletic and cheerful man Dad used to be. They strongly remind us, however, of his kindliness and love.

To Dad, wherever he may be now! May all dads be like him!

This site uses Akismet to reduce spam. Learn how your comment data is processed.